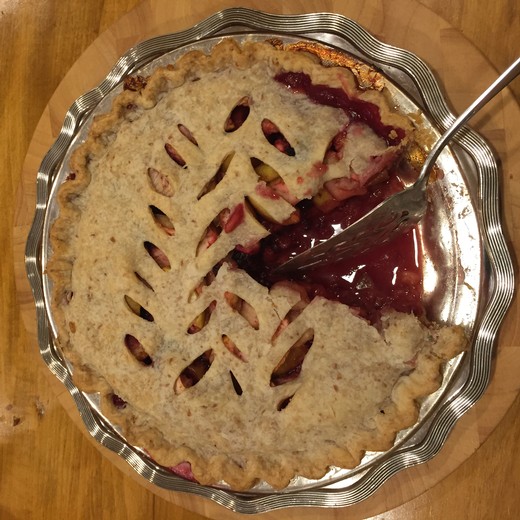 For the Crust:
Mix dry ingredients and then add lard/oil & butter until the flour is sort of “pebbly”, the size of large peas. Mix vinegar with COLD water and add 2 tablespoons at a time to the flour and quickly mix until you have a soft, but not too sticky, dough. Divide the dough in half and roll each thinly between two pieces of wax paper so as to fit a 8-9” pie plate. With the lard crust, make certain that you sprinkle  additional flour as needed onto the dough so that it does not stick to the wax paper - it is very sticky.

For the Pie Filling:

You may peel the apples if you like – I do not, on the assumption that it sometimes adds color as well as vitamins and I use organic apples only. Cut the apples into quarters and core them. Then slice them into small slices, even chunks if you prefer, into a large bowl. Add lemon juice and zest. Mix flour, sugar, and coriander and pour over sliced apples and blackberries.

Assembly:
Line an 8” or 9” glass pie plate with one crust, removing the wax paper, being careful not to tear any holes in the crust. Add the apples/blackberries, taking care that there is not much space between the apple pieces – you need not place the pieces individually, but try to fill the pie plate carefully.

To add the top crust, wet one finger with water and use it to moisten the edge of the crust. Peel one piece of wax paper from the second rolled crust and with a sharp knife, cut small slits (or your own design) in the top crust. Then place the crust carefully on top of the apples, crust side down. Remove the second piece of wax paper and press the edges of the top crust onto the bottom crust to seal. Dock with a fork or with your fingers, make a pattern around the edge. Bake at 400ºF for ten minutes, then about 30 minutes at 350ºF, until the crust is lightly toasted.

Note on Apple Varieties:
Some say that the best apple pies are the ones that utilize a mixture of different types of apples. We love pies that include crisp tart apples like Northern Spy, Rome, or Granny Smith and even little tart wild ones. Softer apples, like MacIntosh, will require somewhat shorter baking times.