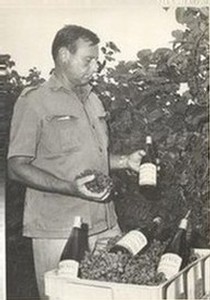 The history of Johnson Estate begins with an English orphan named Frederick Johnson (1877-1960). He immigrated to Canada as a teenager and found his way to Cornell at the turn of the century to study entomology. In 1908, Johnson purchased a circa-1822 home and farm along the banks of Freelings Creek in Westfield, N.Y.  He planted apple, cherry, and peach orchards, and Concord vineyards, and named the farm Sunnyslope Fruit Farm. Johnson worked as an entomologist with the Department of Agriculture in both Washington, D.C. and in North East, PA, where he met his wife, Nan Scouller. In 1920, he built an apple cold storage facility using timber from an 1860's dairy barn found on the farm. This building now houses our tasting room. According to family lore, Johnson started making wine in the basement of the farmhouse during Prohibition.

Frederick Spencer Johnson (1921-1998), grew up on the farm his father purchased. He served in World War II as a naval aviator, graduated from Cornell University in 1946, and then raised his family overseas while working for Nelson Rockefeller’s various agricultural endeavors. When Frederick Spencer returned to the farm in 1960 after his father died, he removed the aging fruit orchards and was first farmer or "pioneer" in Western New York to plant French-hybrid wine grapes in a region completely dominated by Concord and Labruscan juice grapes. His favorite French hybrid grape was Chancellor. Frederick Spencer opened the winery in 1961, receiving New York Farm Winery license No. 2.

When Frederick Spencer’s children, Frederick, Jr., Elizabeth, and Anthony, inherited the farm in 1998, they oversaw winery operations, planting of new vineyards, construction of a finished goods warehouse, and the introduction of new wines, including fruit, sparkling, and ice wines. In 2010, Frederick Johnson, Jr., became owner of the farm and winery with his wife Jennifer. They completed a renovation of the tasting room in 2011, just in time for the winery's celebration of its 50th anniversary. Johnson Estate Winery is now the oldest continuously operating estate winery in New York State.