In Western New York and Pennsylvania, the maple tapping season usually begins in March and we begin to see tubing and pails attached to large sugar maple trees.  Soon the maple syrup will be simmering away and the local sugar shacks and pancake houses will be open for business. 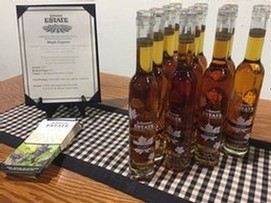 Johnson Estate's Maple Liqueur
Winemaker, Jeff Murphy, loves maple syrup and made an aperitif using estate-grown grape spirits, Vidal wine, and local syrup. The Maple Liqueur tastes like a combination of ice wine and sherry, with a hint of maple on fhs finish. Johnson Estate released this new liqueur in March 2015, just as the region’s tapping season began. To celebrate NYS Maple Weekends, Fred suggested that the winery serve Maple Liqueur and crêpes, which Fanny Tauzin-Dauga, a 2014 French winery intern, made for us during her stay here. So each year, Johnson Estate, a member of the NYS Maple Association participates in Maple Weekends.

A Tasting Room Tradition - Celebrating with French Crêpes
It has become Johnson Estate's annual tradition to serve Julia Child’s French Crêpes and Fancy Ground Nuts with a glass of the Maple Liqueur on the NYS Maple Association’s designated weekends.  This year, Chef Edward Work from the Athenaeum Hotel will be flipping crêpes both weekends ($5/person).  We’ll also be selling French Crêpe kits (white flour as well as gluten-free, buckwheat) so that you can make these treats at home.  We also sell locally-made maple syrup and other maple products.